From the innovative mind of John Green - another cancer story!

I’ve had something stuck in my eye for a week now. This is my excuse for watching The Fault is in Our Stars on a Saturday night. Watching a movie you actively know will make you cry always seemed right up there on the list of shitty ideas with swallowing razor blades or having kids, but I now know that Hollywood must keep pumping out these tear inducing pieces of shit for the masses with bits of dirt stuck under an eyelid. But I digress. I settled in for a good cry with a bowl of popcorn and a mug of tea like the old lady I am.

The Fault is in Our Stars has all the ingredients of a sob-fest. And by that, I mean there’s not just one, but multiple dying kids with cancer. "Kids with cancer?" I thought, "This son of a bitch in my eye doesn't have a chance". I was wrong. Not only did I not shed a single tear, but I became so bored during the movie I actually drifted off - likely pushing that fucking piece of dirt further back in my head.

The title is a play on a quote from Shakespeare’s Julius Caesar – “The fault, dear Brutus, is not in our stars, but in ourselves”. With this in mind, I thought Shakespeare would pop up SOMEWHERE during the tedious 2 hours. He did not. In hindsight it’s probably a good thing. Poor Bill would be clawing at his coffin to think how his words are being recycled now. Can we take a hot minute to recognize that Bill is basically saying that we're the masters of our own fate? And that this is also not a theme in the movie? Sure, by leaving out the "not" it's implied that cancer is directing cancer kids' fate, but if you're going to title your book/movie after a Shakespeare quote, make it a god damn focus. As Bill says, "Oh these deliberate fools". 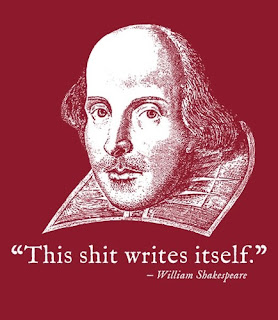 A sanctimonious synopsis
Here’s my quick synopsis of this movie. Kids have cancer. Audience is reminded that cancer may make you lose your hair, but not your hormones. Kids exploit their disease to get a free trip (to the sex & drug capital of the world…clever kids) & meet literary hero. Hero shits on kids (thereby becoming MY hero). Kids fall “in love”. One kid dies. Kendra wishes she had.

"Let me be boiled to death with melancholy" (If Mr. Green won't put Shakespeare to proper use, I will)
Cancer sucks. So why do authors & producers keep reminding their audiences of that fact? Let's let those affected deal with it in peace. Can you imagine trying to temporarily forget your own troubles by going to a movie, and all there is to see is movies about the very thing you're trying to escape? Ugh. That'd be like me going to see a movie about a broke-ass bitch. Hard pass.

Anywho, there's these kids that have cancer, and they're dealing with it like champs. They're socializing, joking around, and dabbling in all kinds word play and philosophy and shit - you know, like all teenagers do. No, sorry, I'm thinking of drugs. All teenagers dabble in drugs. So the two cancer kids get a trip to Amsterdam to see cancer girl’s favorite author – neat. If I could meet my favorite author, he'd be the most literate zombie around, but I’d be pumped too. For some reason cancer girl is surprised that he’s an asshole. Uh sweet pea, he’s a writer. Of course he’s a moody drunk. And his happy hour was just interrupted by two kids who expect the world to bend around them because they’re dying (yes – I’m THAT bitch. You can stop reading now if you’d like. It’s only going to get worse from here).  Willem Dafoe’s real life can’t be much different than that of his character. Mid morning, drink in hand, bangable assistant, it’s a life we've all wistfully dreamt of.

So after the author ruins the kid’s day, his hot assistant offers to take them sight seeing. Where do dying kids want to go in Europe? To the house of a dead girl of course! I fo sho thought that cancer girl was going to croak when she was climbing around Anne Frank’s house, but unfortunately she prevailed. Then she kisses cancer boy, and everyone claps. Pretty sure the last time I sucked face with a teenage boy in public, all I got was glares and fake gagging.

"Now is the winter of our discontent"

The casting was good. I’ll give it that. But that’s about all I’ll give it. How the fuck this movie got 81% on Rotten Tomatoes is beyond me, but clearly I’m not the intended audience of The Fault is in Our Stars. I am not young, nor am I an adult, and clearly I’m not sympathetic enough to appreciate the issues kids with cancer go through. Here I am, thinking that cancer was about surviving, whereas I apparently should’ve known it was about losing your V-card before dying. Fuck me, right?

One unlit cigarette out of five tumors.

PS: As a bonus, here's the best Shakespeare quote I know:
Thou mis-shapen dick! (Henry VI)